There have been so many little moments in the past week and a half since Hope was born that have made me laugh or smile or just need to be written down somewhere. This will be a fairly rambling list of as many of those moments as I can remember.

The day after Hope was born Nathanael and I strongly felt that special new-parent kind of overwhelmed where there are suddenly half a dozen things that need to happen at once. This led to the following list of demands/happenings: my nurse had just taken my IV out, my IV site was bleeding, Nathanael had just arrived back from picking up Subway for lunch (a newly not-pregnant lady has to be craving deli meat, right??), I needed to pump, and I desperately wanted to already be up in the NICU visiting Hope. Solution? Nathanael applied pressure to my elevated IV arm with one hand, alternated feeding himself and me bites of our subs, and I held my pump in place with my other hand in order to express milk one side at a time. The nurse walked back into the room to witness this scene and said something like, “Now that’s teamwork.”

Hope has been awfully smiley the past couple of days. I don’t care what people say about baby smiles being “just gas,” her smiles are heart-melting, nonetheless. Once when I was kangarooing her I laughed at something a nurse in the room said, and Hope smiled. I like to think the sound of my laugh is pleasant and familiar to her. You may roll your eyes, just don’t let me see.

The first time I met with one of the physical therapists with Hope she remarked that, “Her activity is beautiful, she’s moving regularly and just as much as we would expect her to at this point.” It took me a second to realize she was talking about her bowel activity and movement. I don’t remember now what she said that triggered that realization, but it made me laugh. I told her that was the most poetic description of poop I’ve ever heard.

One of our first days in the NICU, the whole hospital had just gotten new phones. The nurses in our pod that day were all really funny and playful and kept changing the ringer on the phone in the room when a new hospital staff member was in the room, just to confuse them. Their favorites were either a male or female voice asking “Are you there? Are you there? Are you there?” and they cracked up about how when the phones were first installed that’s what the phone company guy set the ringer as. They claim they went all day without answering the phones and wondering where that disembodied voice was coming from and who it was talking it (I hope that’s an exaggeration, though!) They also really liked a little saxophone riff and joked that it made them want to answer the phone in a sultry voice every time it rang. I heard lots of phone-answering full of giggles that day. Parents and other staff calling our pod must have wondered what had gotten into all our giggly nurses.

The night Hope was born, while I was in early labor (but the drs were still trying/hoping to make the contractions go away), Nathanael saw on Facebook that an old college friend of his had just had premature twins that evening. He messaged to ask what hospital he and his wife were at, and we were both thinking “What are the odds that they might be here, too?” And they were! Well, are. They were probably just on their way up from L&D that Friday night as we were heading down. And when we got up to the NICU early Saturday morning to see Hope for the first time, their twins were in the beds right next to Hope! Meeting this couple and chatting with them in passing in the halls and over texting has been a highlight of this whole experience. Their twins are gestationally a couple of weeks younger than Hope, but in terms of birthdates they’re a day older. They have a boy and a girl. Please pray for their little babies to grow and be healthy! So far I think they’re doing fairly well. Mom and Dad have both gotten to Kangaroo hold them over the past week (or more? I’ve lost track of the days), which I know is such a relief. The biggest downside of our moving downstairs to the overflow pod yesterday is that we won’t run into them in the halls anymore. We’ll have to schedule visits to each other’s pods now. I can’t help but shake my head in wonder at the Lord’s kindness in this particular coincidence. What a blessing to meet/have friends to go through this crazy NICU experience with.

A special moment yesterday was bringing sweet joy to Ella when she received her first gift from her baby sister. Someone (many someones, rather) makes blankets and hats for the NICU babies here, and they all got special Valentine’s Day sets of hats and blankets. 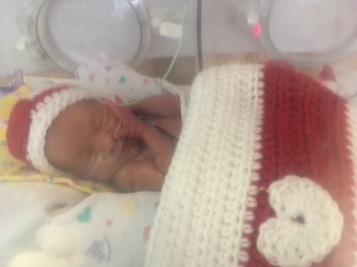 Hope will quickly outgrow the hat and isn’t allowed to use the blanket in her isolette because it would throw off her temperature regulation, so one of the nurses suggested I take them home for Ella to use for her dolls. I loved the idea and immediately wished I had thought of that, so last night after dinner I got one of her dolls out that’s close to Hope’s size and told her I had a special present for her from Baby Hope. She was transfixed while I put the little hat on the doll and wrapped the blanket around it, and I could tell she was trying so hard to hold her arms back from grabbing it from my hands until I held it out to her. She was soooo happy! And she has thoroughly enjoyed putting the hat on and taking it off and wrapping and unwrapping the doll in the blanket over and over and over since then. She talks about Baby Hope as if she’s a real and normal part of her life: she regularly comments that the milk Mommy is pumping is Baby Hope’s milk (and then tips her head back and gulps, points to her tongue, and says “Baby Hope tongue, milk,” and gulps again); she said “night night Baby Hope” today before her nap; and she frequently asks to see pictures of her on my phone. Melt my heart just a little bit more, kid. 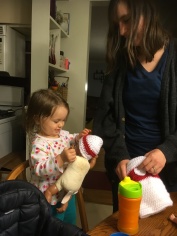 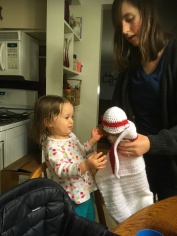 This is a crazy life that we’re living; it’s often overwhelming. But I feel full, too. In a good way. Not just in the “overwhelmed” sense of the word. All these little moments and sweet memories make the NICU experience not so bad.

A big moment for me happened today, too. I got to wear Hope for the first time!!!! (I actually wrote most of this while wearing her. Yay hands free baby snuggling!)