While We Were Waiting

This is her only preemie sized sleeper. It still fits her! 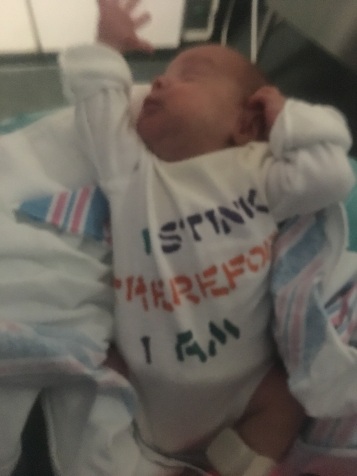 My brother made this onesie for Ella when I was pregnant with her. Now Hope gets to rock it!

Hope is home now, which is wonderful, but I need to update about those last 12 days in the NICU between my last post and her homecoming! This won’t be nearly as detailed as I would have liked, because I’ve already forgotten parts of it.

The week following my March 18th post was so stressful. Hope had lots of feeding related bradycardia spells the weekend of that post, and she continued to have a few of those spells each day over the following week. The doctors in the NICU were very reassuring throughout all those spells that they were not due to her new medication and that the characteristics of her spells were not actually concerning to them. Here’s why:

One probable contributor to the sudden spike in spells that Saturday is that Hope had just started taking all her feeds by mouth. That means she was exerting herself a lot more than before which may have just made her a bit disorganized from being tired. Also, I have a lot of milk, and that’s most likely the reason for all the spitting up she does. And all that spitting up is one of the triggers for spells.

So the doctors continued to express their lack of worry about these bradycardia spells as the week got rolling. They were simultaneously happy that the medicine they put Hope on was proving effective. Sometime midweek I was asked to bring Hope’s carseat in for her carseat challenge. How exciting! A requirement for discharge that is normally reserved for the last few days was about to happen! She passed her carseat challenge on the first try (she had to sit buckled into it for 90 minutes without her oxygen saturation dipping below normal limits).

Wednesday or Thursday the doctor wrote an order for us to stay in the suite with Hope on Friday night and go home on Saturday. I was beyond excited. It was especially perfect because my parents were visiting that weekend,

so that would make childcare for Ella easy. On Friday morning when I arrived at the hospital, I was told Hope had had two spells overnight. The doctor pushed our suite stay back to Saturday night instead so that he could see Hope on the monitor for one more day. This was disappointing but not devastating. It was definitely confusing though. He was still saying the spells weren’t concerning, so I couldn’t help but wonder “Then what are you watching the monitors for…?”

On Saturday when I got to the hospital I learned she had had one or two more spells, and this time her oxygen saturation may have decreased slightly during one of them, and her heart rate was lower than usual during her spells, and a different attending physician was on call for the weekend. He decided we should wait until Monday to talk to the attending on for the current few weeks and plan from there for discharge. This was much closer to devastating news than the previous day. I was extremely disappointed that my parents would no longer be able to be there for Hope’s homecoming and to see Ella meet her sister for the first time. The back and forth of “Yay, we’re leaving!” and “No, we’re not,” and “Yes, we are!” and “We don’t know when we will be leaving,” was incredibly trying.

Meanwhile Nathanael had the flu that Friday. I was sleeping in the guest room to avoid his germs, and if Hope had come home she would have stayed there with me and he wouldn’t have been allowed to hold her for a few days after being better.

Monday morning came, and the doctor reiterated that full term babies have these spells too, and that it was clear on the record of her spells that everything was reflux related. They were all either during or soon after eating. Because of that, he said she could continue to do this for months, and they’re not going to keep her there for months because it’s not necessary. The spells are not harmful for her. But, he said, because they had seen the spells happening already, now they had to keep an eye on them. Nathanael’s interpretation of this information was that it’s a liability issue. This explanation was the only thing that made the contradicting “We’re not concerned” and “We want to keep an eye on her” statements make sense to me. The doctor explained the parameters of spells he would accept and still let Hope go home. She kept within his limits for the next 48 hours, and he signed off for us to stay in the suite last Wednesday night. By then Nathanael had been healthy for a few days and was able to stay with me, and his dad stayed at our house with Ella.

As soon as I got into the suite with Hope (she was finally wireless!), I fed her, then I put her in my wrap and paced gleefully around the room as far into every corner as I could just because I could! This was the first time I had ever held my baby without her being attached to a monitor with wires that limited our movement to about a two to three foot radius. It was so freeing!

This is the sleeper we took Ella home in! I planned to take Hope home in it too, but she spit up all over it.

Overall, Hope’s NICU stay was so uneventful. We were just waiting it out while she grew and learned to do healthy baby things like eating and breathing that simply took time for her to develop. And then, as soon as we started saying “We’re almost done here!” we were met with wrenches. The SVT, the bradycardia spells. All the up and down of those last two weeks of thinking we were coming home and then having it delayed multiple times was definitely the hardest part so far of this whole experience. I finally got super impatient to be done, and for a couple of mornings after we were initially “supposed to” come home, I didn’t even want to go to the hospital. I was so bitter about still having to go there to see my baby. But I also couldn’t just not go in; I had to see Hope.

On the bright side, staying longer meant I got to spend more time with our friend Heather whose twins are also in the NICU. The Tuesday a week and a half before we ended up going home, her twins were moved downstairs from the main NICU to the overflow pod where we had been for most of our stay. It was so nice to be nursery buddies again! Seeing her most days and chatting about what we were each going through made it so much easier to stick it out most of another week.