Travel Tips for when Littles are in Tow

My family recently took a beach vacation that began and ended with a 12 hour drive according to Google Maps (it took many more hours according to real life). Google Maps is great because it can warn you of traffic delays and reroute you in real time if another

way is faster. However, it does not account for diaper delays, necessary children’s outfit changing stops, hungry baby emergency pullovers, or tantrums. Unfortunately, there is no detour for these items. But traveling with tiny passengers doesn’t have to be the worst case scenario! Our most recent trip helped my husband and I learn a lot about the best ways to travel long hours by car with our two-year-old and infant—mostly via doing what not to do and then saying to each other, “Let’s not do that again!” The following is the wisdom we gleaned along the way. We share our amateur know-how so that other parents living on the edge by strapping their kids in for hours of claustrophobia can skip making the same mistakes we did!

1. Drive when they already expect to be sleeping.

This was the number one thing that went well for us—when we actually did it, that is. From start to finish on this vacation, we got up in the middle of the night twice and drove as far as we could. Those were the two absolute best, most peaceful, most efficient segments of all the traveling. I drove until breakfast for both of those times because I’m a 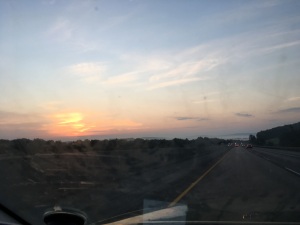 nursing mom, which means I’m used to not sleeping for half the night. We had tried this once before this trip, as well, with mixed results. That previous time, we got in the car at 5am. The sky was already lightening, so our toddler stayed awake for about an hour-and-a-half—albeit, quietly—before finally dozing off for a little while. We realized it has to be dark during the transfer to the car for night driving to work. That’s with the assumption that you’re starting with sleeping kids, though. Having them already asleep works better for us, because they tend to wake each other up with their own falling-asleep habits (they both talk/sing themselves to sleep). This time, we left by 3am for each early driving shift. Both kids went right back to sleep as soon as they got in the car. In the future, we’d like to try leaving even earlier to get further while they’re asleep.

2. Just GET there (OR plan really well).

We thought it would work really well for our girls—our energetic toddler in particular—to break up the drive over two days so that there was no seemingly endless stretch of driving. Some friends of ours had done this same drive earlier in the summer and told us about how breaking it up over two days worked great for them. They must have been a few levels above us on their execution, because this backfired for us for a few reasons.

First off, we neglected to make sure the hotel we booked for our night in between would allow early check-in. So we were off to a great start with our 3-7:30am drive, a decently long breakfast stop, and a peaceful morning of driving during which the baby napped and the toddler read books and played with toys mostly happily. We got to our intended halfway point at about 11am. Check-in at our hotel wasn’t available until 3pm. That left us having to figure out how to kill time with two kids in a strange city without a place for any of us to nap. Not. Awesome. Luckily, we were able to spend about two of those hours playing in the hotel pool, but that still wasn’t ideal. Our plan had been to get there, eat lunch, and then tag team napping and watching the kids.

Second, the lack of napping facilities during this “down day” of travel meant we were too tired to get up in the middle of the night again to finish off the drive. This mistake proved fatal to the happiness of everyone in our car the next day. Because we didn’t get out of town before traffic picked up, we ended up having the choice of sitting in two hours of traffic going nowhere according to our trusty Google Maps or going on an alternate excursion to wait for the traffic to clear. We chose the latter. The extra outing itself was fun, but it meant that the final leg of our journey took place after 5pm. Many parents refer to the evening as “the witching hours.” This name has never been so fitting as during those hours in the car with our children. Lord, have mercy, they screamed so much. But we got there.

Third, we tried to make our half-day stop (which actually became two separate half-day stops) interesting by seeing some sites. And that leads me to my next tip:

3. Do what works best for your kids, not anybody else.

On travel day one, we stopped for the day in a big city with lots of fascinating historical sites to visit. Two other cars of extended family had caught up to us by then (they didn’t want to get on the leave-at-3am bandwagon), and we all chose to go downtown and be tourists for a couple of hours before dinner. In retrospect, this was a horrible idea. Here’s why:

What we should have done, had we still wanted to break up the drive over two days, was to heed our friends’ original advice and go do something fun for the two-year-old as soon as we got out of the car. Our friends spent their fun part of the day at a zoo.

Not everyone in our caravan wanted to go to the zoo, and a couple of family members who would only be driving with us on the return trip did want to go, so we planned to go to the zoo on the way home instead of on the trip down. Mistake. We should have gone to the zoo, or a park, or some place that would interest and occupy our toddler and wear her out with fun instead of with boring, humid, being-carted-around-while-hungry. Then we could have napped as soon as check-in was available at the hotel, ordered take-out, and gone to bed early.

Other than the sore feet and sweaty bodies, I think the rest of the family members we were traveling with enjoyed both days’ visits to historical sites. That kind of stuff can be fun for adults. I found it all interesting. But with small kids, it just wasn’t an enjoyable way to spend our time. We agreed that it would be nice to go back to those places in about 15 years when maybe our kids will be old enough to care about what they’re seeing.

On the way home, because our journey to vacation was such a flop, we opted to stick with what went well (leaving in the middle of the night) and toss all of our lofty dreams of seeing the zoo and breaking up the drive. We would just muscle through to get home in one day. This ended up working really well, largely because we made sure both of our 1.5 hour pit stops included food and play time all in one place. And that brings us to our final bit of advice:

If you’re not splitting your drive over multiple days, it’s important to stop long enough for your kids to actually feel like they got a break, but short enough that you (and they) don’t feel like the drive is taking forever.

Look for places to stop at meal times since you’re going to have to eat anyway. Find restaurants (or picnic areas if you brought food) that are either near a park or open area where your kids can get some wiggles out or that include both food and fun under one roof. Each of our breakfast stops on the way down and back were just at restaurants, butwe took turns walking around the building with the toddler so that she could at least stretch her legs before getting back in the car. Wiggle-release 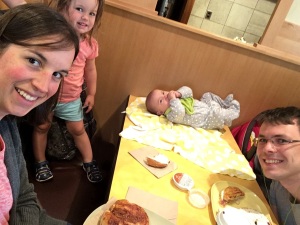 wasn’t as crucial at breakfast time because so far she had only slept. She still had some time-passing stamina reserved for our mid-morning drives. However, a Chik-Fil-A with a play place would have been a great breakfast option.

For our lunch stop on the way home (which was really our only big win in terms of stops since on the way down we dragged the kids along to monuments and a preserved old house where they couldn’t touch anything and we had to go outside when the baby cried), we found a local restaurant that was similar to Chuck-E-Cheese. The pizza was fine, but the real reason we loved this place was the floor-to-ceiling network of tubes and nets and swinging apparatuses (apparati?) for our little one to climb on. She was quite possibly as happy there as she had been in the pool or on the beach the whole previous week on our spectacular vacation.

Traveling with kids can be awful, but it doesn’t have to be. With living in a different state from everyone in my family, our kids spend a lot of time in the car beginning in infancy. An author I admire, Tsh Oxenreider, once said in an interview that for kids to become good travelers, they have to practice beginning at a young age. There may be years of miserable travel with children before they hit a sweet spot where they can do it well. So far we have found that if we time our driving well and cater to our kids’ needs for movement and play (and food!), they really do mostly travel well.

I hope the next time you and yours hit the road there are more laughs than tears! Happy travels!