This was my answer on a recent Wednesday evening, every time I was asked “How are you?” or “How was your day?” Seeing babies come into the world just doesn’t get old. And it certainly defines a day.

Tyler’s birthday was so special. His birth was beautiful. His mom’s strength, calm, and focus as she and her son worked together to bring him into the world were remarkable. He was in a position sometimes called “sunny side up,” which unfortunately meant his mom’s labor was probably more painful in her back than it would have been otherwise, but it also meant when he emerged from his cozy home of nine months, I had the great privilege of seeing his face right away. If his eyes had been open he would have been looking right at me. The sight of his sweet face took my breath away. “Look, there’s his face!” I whispered to his dad, TJ.

The first time I met Sarah was in her backyard. A mutual friend had suggested we hang out, like a blind playdate, one afternoon when I was feeling especially stir-crazy at home with my own kids. She assured me Sarah wouldn’t find it weird to have a stranger over to her house without even having that mutual friend there as a buffer. I nervously agreed and showed up with my two kids. As soon as we were there, I understood that what my friend had told me was true. Sarah welcomes everyone who comes to her house as if you’re an old friend. Eat her food, let your kids make a mess with her kids, take a nap on her couch (I’ve witnessed this from another visitor since that first time we met, but I haven’t personally done this… yet)—it’s all good! She is unruffled by such things.

I’ve heard Sarah tell others since that first day that I met her that she views her house as a place meant for sharing. She has publicly professed that her house is messy so that other people feel comfortable there rather than feeling some sense of formality. And she’ll tell you this without a hint of self-consciousness. I admire her confident and relaxed approach to hospitality.

And it’s not just hospitality! When Sarah first told me she was pregnant, and I half-jokingly asked if she wanted a doula at her birth, she said, “I’m not particular about how my babies are born as long as they’re healthy.” And she really meant it. Of course everyone’s goal is a healthy baby, but most women also have strong opinions about how they get to that outcome. Her “come what may” attitude that had served her well in previous births was genuine, and it remained so throughout Tyler’s birthday as well. As I’m accustomed to women with very strong feelings about how they have given or will give birth, Sarah’s neutrality was surprising. As her fourth child’s birthday came and went, though, I learned that her neutrality is a blessing that is full of wisdom, and I hope some of it rubbed off on me.

It’s that laid-back, warm hospitality and that open-armed embrace of all circumstances that came to mind again and again as I spent the day with Sarah and TJ in Labor and Delivery. They may have been en route to meeting their son, Tyler, but for most of the day it appeared as if they were just hanging out with a friend (that’s me!). They shared stories without even a hint of a facade about so many aspects of their lives—homeschooling, their Christian faith, TJ’s work history, their church history, previous births, dynamics between their children, exercise, friendships, etc. I was grateful to be welcomed into such transparent conversation throughout the day, and I was personally blessed by their wise counsel as a couple of parents/Christians/married people just a little way ahead of me on the road. As Sarah shared with me later, the day “felt like a car trip where you get good conversation in. It was really wonderful!” I don’t know many people who would describe their labor to have a baby like that. 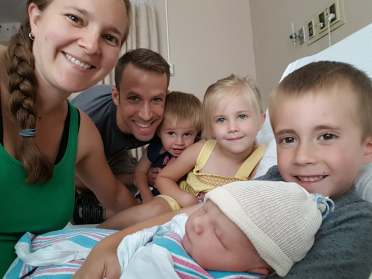 But Sarah would. Because the story of Tyler’s birth is a smaller version of the story of who Sarah and TJ are and how they choose to live. Stay calm and relaxed, roll with whatever is happening, welcome whoever joins you along the journey, share your life with honesty and warmth, and enjoy each other’s company.

When her contractions took a little hiatus, there was no fuss or worry. We just chatted. Then we all napped. When Sarah felt a little woozy after her epidural, she calmly relayed how she was feeling to her husband, me, and the nurse so that we could all work together to make sure she and Tyler were alright. The potential stress of that moment could have easily tipped most people into a panic, but the Burnses took it all in stride. When the contractions became more painful as our conversation about church was going deep, Sarah asked TJ to keep talking in order to distract her. As TJ and I pressed our fists into Sarah’s hips and quietly reminded her to unwrinkle her brow or unclench her jaw, she never failed to end a contraction with a sigh and a, “Thanks, guys.” The atmosphere in the room was one of peace and camaraderie as it had been all day.

And all day, I couldn’t help but think of that birth room as a microcosm of this couple’s approach to life. In many ways, it was just another day. On the other hand, it was a day so special that it called for high spirits, for joy, for laughter, for letting go of every potential anxiety. And from all my interactions with Sarah or TJ, that seems to be how they treat every day. With gratitude, with joy, and with hands that are open to let go of life’s worries and welcome other people into their lives.

There was so much wisdom in the way those two approached writing the story of their newest son’s birth—wisdom not just for birth but for all of life, as well. I’m grateful to have spent that day in that microcosm and to have had the chance to learn from them. Thank you, Sarah and TJ, for treating strangers as friends until they become just that. 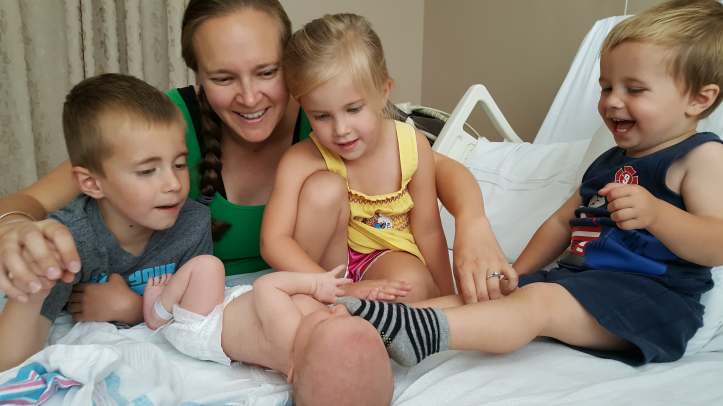